Last night I taught a webinar for the Astrology University on the theme of Meetings with Remarkable People, during part of which I looked at the remarkable relationship of Helen Keller and Anne Sullivan, her youthful teacher. Helen was made both deaf and eventually blind at 19 months old by a severe childhood illness. Distressed by the world around her that she sensed but could not participate in, Helen became a wild and disruptive child, wreaking havoc in the gentrified environment of her southern country home.

Anne Sullivan, herself partially sighted, had escaped the poorhouse as a young teenager by pleading with a visiting dignitary that she receives an education. With that education finally under her belt she accepted the first job that could pay her enough to continue her life – until on the 3rd of March 1887, she stepped off a train in Tuscumbia, Alabama full of prejudice against the south, and yet full of determination to reach out to her wilful charge, Helen. Helen Keller, with the transiting nodes on March 3rd, exactly square her natal Pluto in Taurus, later described that day as her soul’s birthday.

The beauty of this phrase and its curious vitality struck me as I gave the online seminar. It seemed as I said the words as if I was describing the essence of the natal chart itself; some secret potential within astrology that it might speak to our soul: a crucial part of the attraction of the field to so many of us.

On the 5th April 1887, after separating Helen from her family and insisting on a disciplined response from her, a crucial breakthrough occurred when Anne Sullivan took Helen to a water fountain and signed on her hand the word for “water” as the actual substance flowed all around the child. Finally, Helen was able to make the leap to what words meant; that they referred to something. She learned a whole host of new words that crucial day, including the word for “teacher,” which she used to refer to Sullivan for the next 50 years until her death.

Anne Sullivan reached a solid hand down into the chasm of darkness and silence that the young Helen had fallen into, with no apparent way out.

A few days ago, I finished work and went into my living room to spend some time with my 9-month-old daughter. I realized I needed use the restroom first and left quickly, and almost instantly my daughter shrieked with hurt. She had seen me and wanted to connect. So I came back into the room and showered her face with little kisses and she shrieked with delight instead. That is how sensitive and relational children are. Little Helen Keller had been stranded alone in the dark and someone came into her world. That is why she called that day her soul’s birthday – because that is when she came alive.

Now, without diminishing in any way what Helen Keller went through, we are all, at times at least, alone in the dark. We are all looking for a solid concern, a valid reception of our own innermost core or essence. We can all feel a terrible hurt when others seem to reject, accuse or betray us. We all, at times, need someone to reach out a hand toward us. The natal chart symbolizes the soul potential within us and yet the natal chart requires activation in order to feel that living essence – just as the young Helen Keller felt the water pour over her and began to understand how words can actually connect us to the world.

The activation of the natal chart is something that occurs within childhood development, within education, within our core relationships – it is a product of our life. Yet the sensitive astrologer also recognizes that maybe a part of that activation has never occurred. The astrology reading itself, on a subtle yet profound level, might offer permission for that individual to rediscover parts of themselves that have become lost and afraid. As we do that, we ourselves are changed.

Anne Sullivan was changed by becoming the teacher of Helen Keller. On the day they met, transiting Uranus was on Anne Sullivan’s north node of the Moon in Libra – a once-in-a-lifetime transit in which she found the greatest love of her life in the form of an unruly child that she could help unravel and grow. Helen would hold Anne’s hand on her deathbed. They were close throughout their lives. In teaching Helen, Anne found herself learning a new way of being.

There is the natal chart; the natal imprint. Then there is how we have lived that imprint. Dane Rudhyar wrote movingly in the pamphlet From Humanistic to Transpersonal Astrology that in a reading one must assess to what extent the individual has already lived their chart. Sometimes as Astrologers we are trying to read people as if they had just been born – instead of listening to how they themselves have already grasped the potentials in the natal chart.

I find Helen Keller’s idea of the soul’s birthday so inspirational because it includes the idea that at any point in our lives we might awaken to the greater potential of our soul life. That as astrologers and healers we can then orientate ourselves to that possibility within our clients and students as well as, always, within ourselves. 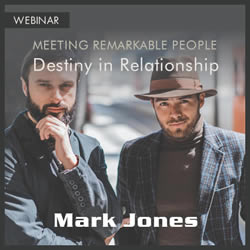 In this pre-recorded webinar, Mark looks at the moments that shaped the destiny of successful collaborators and eventual friends as well as moments of redemption, dashed hopes and relationship failure.