An unexpected opportunity left me able to pick up work on the Planetary Node research recently.  I was able to write a final chapter for the book as well as being able to respond to edits, so it looks very likely that early next year the book will finally be out. It will represent decades of research for me and three close years of research for me and my primary researcher Patrick Graham. We very much hope to make a substantial contribution to the field with our work.

After such a long period of investigation I can genuinely say that I experience the extra information that the planetary nodes offer as akin to an invisible architecture behind human history on an individual and collective level.

For example, let’s take the chart of Malala Yousafzai (12 July 1997 8:30 am Mingaora, Pakistan. Rodden Rating C) which I will be looking at (from a non-planetary node perspective) on my upcoming Astrology University Summit lecture on the weekend of the 26/27 Oct, 2019. 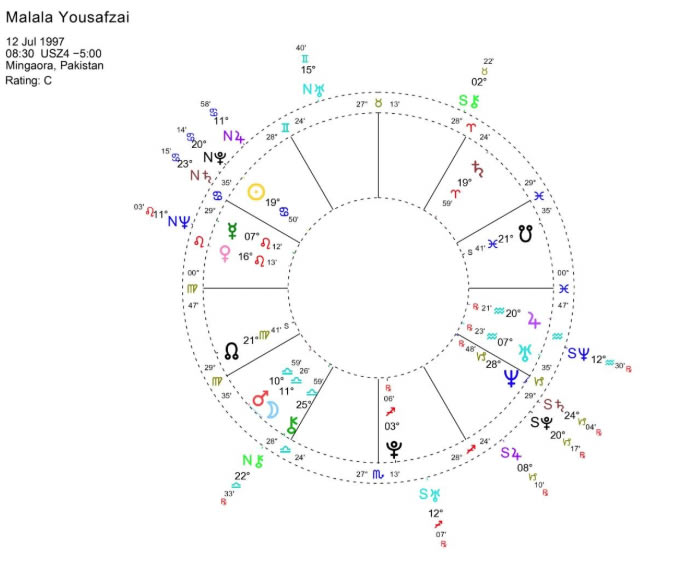 This brave young woman who touched the world with her bravery in standing up for young women’s rights to education, in parts of the world where that can be violently denied, has her Mercury-Uranus opposition widely conjunct the nodes of Neptune. She stands as a symbol for the healing dream (Neptune) for the rights of all to an education (Mercury/Jupiter), which is a revolutionary (Uranus) idea (Mercury) in many parts of Pakistan.

Her Sun is closely conjunct the north node of Pluto. For this ‘radical’ idea she was shot in the head by an assassin. In her death/rebirth, she established a centre for the rights of women in education in Birmingham (UK), which is where the hospital that volunteered facial reconstructive surgery for her is located. The planetary nodes speak of a window to the collective significance that our lives might express. I very much look forward to sharing that vision with you all next year.

I am also teaching on Mercury-Jupiter square the lunar nodes for the Astrology University on Oct 19th. So much research emerged from this that I could teach a weekend on just Jupiter square the nodes! The webinar will mix historical examples (from Emmeline Pankhurst and John Milton to Charles Manson and Leonardo da Vinci) as well as an in-depth analysis of a reading that I did for a client with Mercury square the nodes about regaining her voice. I look forward to teaching those that can make it on the day or via recording.

I wish you all the best with your studies!