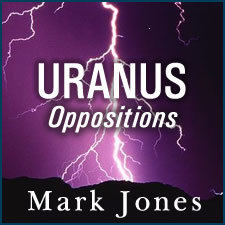 In this audio workshop with Mark Jones you’ll get a look into one of the most important life-cycle transits we all experience in mid-life: the Uranus Opposition. You’ll learn about Uranus in relationship to the Saturn cycle, which interpenetrates the Uranus cycle so that there is always a dynamic interplay between the two.

Mark discusses the nature of Uranus as the higher octave of Mercury and how it refers to the non-linear field from which true inspiration and deep memory arises, interlocking with the linear mental function of Mercury.

For examples of the growth potential contained within this important life transit, Mark shares the story of Rosa Parks at her Uranus Opposition. This example reveals the link between the first Saturn Return and the Uranus opposition, two of the most significant universal transits, The bus driver for whom she refused to move seats at her Uranus opposition was the same one who had mistreated her years before at her first Saturn Return, and for whom she had vowed never to ride with again. Parks was so tired from working all day in a basement that fateful day that she forgot to check whether he was the driver when she boarded the bus. The personal events of her life tied together the significance of the Saturn Return and the Uranus opposition and famously triggered an event of massive collective significance.

Mark also looks at Freud’s analysis of his own father’s death at his Uranus opposition.